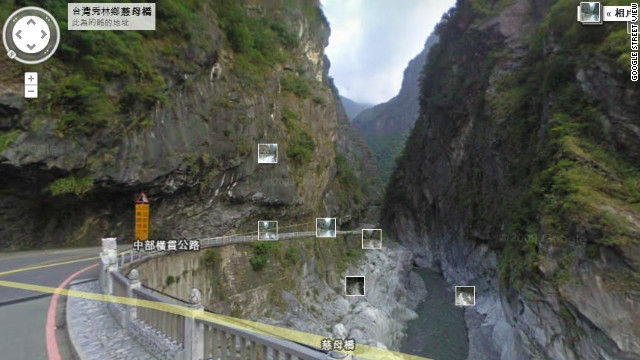 Taroko Gorge, in the Taroko National Park in Taiwan, was part of 250,000 miles added to Google's Street View in an update.


(CNN) -- With fallout still swirling from Apple's decision to replace Google Maps with its own mobile mapping, Google on Thursday announced the biggest upgrade ever to its Street View tool.
The update adds more than 250,000 miles of roadways in 17 countries, said Ulf Spitzer, Google's Street View program manager, in a blog post Thursday.
The Street View feature on Google Maps lets users see a real-world, 360-degree view of locations. Showcasing Google's global reach, the new coverage areas include parts of Macau, Singapore, Sweden, Thailand, Taiwan, Italy, Great Britain, Denmark, Norway, Canada and the United States.
Since launching in 2007, Google Street View had captured 20 petabytes of data in 48 countries. The company uses cars, trikes, snowmobiles and people outfitted with custom cameras to capture 360-degree images around the world.
In the new update, Google also added a spate of "special collections" to the feature, providing virtual tours of attractions around the globe.
"Street View, as you know, is a useful resource when you're planning a route or looking for a destination, but it can also magically transport you to some of the world's picturesque and culturally significant landmarks," Spitzer said.
The new spots include Catherine Palace and Ferapontov Monastery in Russia, Chiang Kai-shek Memorial Hall in Taiwan and Stanley Park in Vancouver.
Google Maps has been on the minds of many since Apple decided to replace it as the default mapping system on iOS 6, the latest version of its mobile operating system. The update coincided roughly with the release of the iPhone 5, meaning millions saw the new product for the first time after getting their new phones.
Early reviews have not been kind. Apple's mapping software has been a spotty mess, missing huge chunks of the globe and, at times, placing notable landmarks in the wrong place, sometimes humorously so.
The release was bad enough that Apple CEO Tim Cook issued a rare apology, saying in an open letter that Apple is "extremely sorry for the frustration this has caused" and promising to improve the feature.
Google has been officially silent on whether it plans to release a new Google Maps app for iOS 6, which runs on iPhones, iPads and iPods. Reports suggest that it's doing so, but there's no guarantee Apple would approve it. In the past, the company has turned down apps that it deemed compete with its own features.
That's a fact Google CEO Eric Schmidt acknowledged Wednesday, speaking at an All Things Digital conference, where he declined to confirm that a new version of maps is in the works for Apple mobile devices.
"Apple should have kept our maps," Schmidt said, according to GigaOM.
Posted by GeekToGoUSA.com at 9:52 AM