To say its been a rough ride for Facebook's IPO would be an understatement.
And as the social media giant edges toward the close of its first week of trading, questions are swirling about the company's valuation, its profitability and now allegations that full details of the stock's likely value were shared with only a select group of people.
Did some people get a heads-up Facebook's IPO wasn't what it seemed?
Regulators are now looking into the possibility that Facebook's Wall Street investment banks may have tipped off some clients that Facebook wasn't necessarily a great buy or worth the hype it was receiving, according to reports Wednesday from Reuters and several other news organizations.
“Facebook changed the numbers – they didn’t forecast their business right and they changed their numbers and told analysts,” a person at one of Facebook’s banks told Reuters.
The big question is: Did certain privileged customers receive information about the Facebook offering that you as an individual investor might not have?
Rick Ketchum, head of the Financial Industry Regulatory Authority, an independent regulatory body, acknowledged in an article from Reuters that a Morgan Stanley analyst reduced his revenue projections for Facebook shortly before the offering and shared the information with institutional investors.

And now Facebook shareholders have filed a lawsuit against the social network, CEO Mark Zuckerberg and a number of banks, alleging that crucial information was concealed ahead of Facebook's IPO. The lawsuit, filed in the U.S. District Court in Manhattan on Wednesday morning, charges the defendants with failing to disclose in the critical days leading up to Friday's initial public offering "a severe and pronounced reduction."
Facebook defended themselves on Wednesday saying they "believe the lawsuit is without merit and will defend ourselves vigorously."
The report, and now the lawsuit, raises questions about whether Morgan Stanley, one of the underwriter companies that handled Facebook's IPO, or other banks knowingly offered certain investors privileged information that should have been made public. Other underwriters targeted by the lawsuit include Barclays Capital, Goldman Sachs, JPMorgan Chase and Merrill Lynch, a unit of Bank of America.
It is possible that Morgan Stanley may have signed off on a price that was too high or agreed to sell too many shares in the deal, CNNMoney.com reports. Then, Morgan Stanley analysts are alleged to have told certain people they had a negative assessment of the social network's offering.
"If true, the allegations are a matter of regulatory concern to FINRA and the [Securities and Exchange Commission]," Ketchum said in a statement via a spokeswoman.
The New York Times reported Morgan Stanley did more than just quietly share a negative outlook; they actually "held conference calls to update their banks' analysts on business."
"Analysts at Morgan Stanley and other firms soon started advising clients to dial back their expectations," the article says. "One prospective buyer was told that second-quarter revenue could be 5 percent lower than the bank’s earlier estimates."
Sallie Krawcheck, Bank of America's former head of wealth management, took to Twitter to share her outrage about the allegations
Posted by GeekToGoUSA.com at 4:20 PM No comments:

Apple's new 'spaceship' campus: What will the neighbors say? 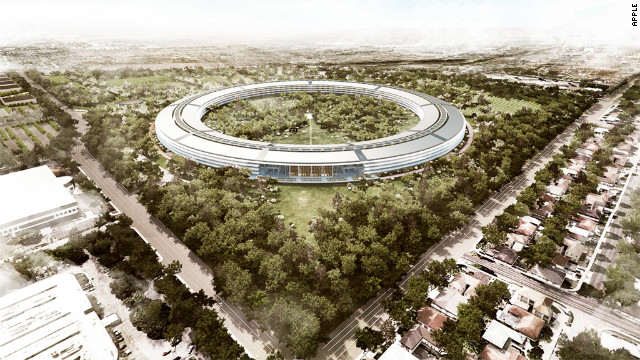 It will be covered in solar panels and house up to 13,000 people on a daily basis -- not to mention 6,000 trees.
It's been compared to a spaceship. And now, as Apple looks to make its innovative new headquarters a reality, it's checking with the neighbors.
Due to be completed in 2015, Apple's new headquarters may be one of co-founder Steve Jobs' final, longest-lasting legacies.
This week, Apple reached out to residents of Cupertino, California, where its current headquarters resides (and will continue to after the new campus is built). In a letter obtained by blog 9to5 Mac, the company seeks to allay some concerns that its neighbors have expressed since the plan was submitted to the city last summer. 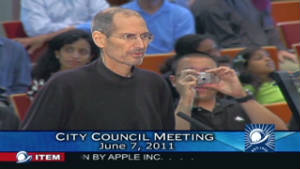 2011: Jobs' pitch for a new Apple campus
According to the letter, the four-story building will be a research facility that will not replace the existing campus on 1 Infinite Loop. And it will not be open to the public, so there will be no museum or corporate store.
The building will contain an auditorium that seats 1,000 and will be used for special events like product unveilings, though.
The letter, from Apple Chief Financial Officer Peter Oppenheimer, says the company plans to break ground on the site as soon as Cupertino gives its approval, which is expected this year.
Neighbors are invited to send Apple a letter or go to the city's website to express any concerns.
In the suburban city of roughly 58,000 people, the primary concerns have focused on additional traffic and environmental impact, both of which Apple says it is addressing in the design of the campus, which is expected to get LEED (Leadership in Energy and Environmental Design) certification as an environmentally friendly project.
The new campus was one of the last major initiatives for Jobs, who died last year.
In 2010, when HP abandoned its Cupertino campus, Jobs quietly arranged to buy the site, according to Walter Isaacson's biography, "Steve Jobs."
"I want to leave a signature campus that expresses the values of the company for generations," Jobs told Isaacson.
A team of 50 architects was hired, and Jobs, as was his habit, was intimately involved in the details, according to the book.
Much of the campus sits on the former site of an apricot orchard, and Jobs required that 80% of the campus be natural, with more than 6,000 trees. Apple hopes to raze 26 buildings on the site to make room for the "spaceship," which will be surrounded by grass and trees.
A June 7 City Council meeting was one of Jobs' last public appearances.
At the meeting, he spent about 20 minutes introducing the project and answering questions.
"It's a little like a spaceship landed," he said as council members got their first look at the design. "I think the overall feel of the place is going to be a zillion times better than it is now.
"I think we do have a shot of building the best office building in the world. I really do think architecture students will come here to see this. I think it could be that good."
Posted by GeekToGoUSA.com at 5:05 PM 1 comment: